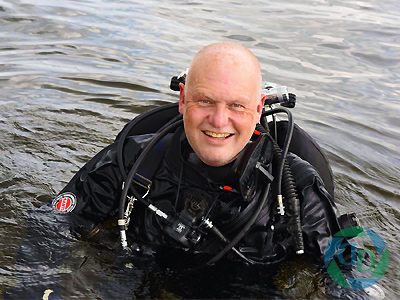 I am Marcel van Engelen, now 56 years old and an enthusiastic diver for 17 years. Since 3 years I am also into underwater photography.

On these pages I will report on my dives and of course publish pictures!

So this site is still hard at work!

I have also involved myself in photography in a gray past. I started with a Praktica MTL3, a fully manual 35mm camera, equipped only with an exposure meter. In doing so, I had a 50mm and a 125mm lens. I used this camera mainly for landscapes and aircraft photography, especially the military aircraft. I did most of it in black and white, which gave the best results. Then came the first digital cameras. I couldn’t really do anything with this, so slowly photography disappeared from the picture.

In 2015, I divorced and resumed training. From Normoxic (diving with helium) to Technical Full Cave diver. From Germany, Switzerland and France to all kinds of spots in the Netherlands, I made lots of dives for 3 years.

Meanwhile, I live with Shelley and after discussion, I then bought my first camera, an Olympus TG5. With this, I took the pictures from Bali and was proud of how it went there! A year later I bought the TG6 and eventually competed with it in the ONK Underwater Photography with Ronnies Tough team led by Ron Offermans. Unfortunately, it was not what we had hoped for.

Following that, I had the opportunity to upgrade my camera, the Olympus OMD E-M1 II. Because our vacation fell through, I was able to buy this camera. Therefore, all photos after July 1, 2020 were taken with this camera.

In September 2021, I again participated in the ONK.
The result is worth noting. Together with Sandra, Mieke and Roy we won the team competition, and again under Ron’s leadership.
In the individual competition, I finished in 4th place in the Sweet section.
So there is a big improvement in my photos.
In 2022, I just signed up again. Unfortunately, my series for the Masters race was not of a good standard due to illness and bad weather. My freshwater photo, on the other hand, was really top notch. The judges commented, “the best pike of the contest” and “I would like to have this one hanging on my wall.” Oddly, despite the praise, they only placed this one 17th.

This was really a short introduction, but this will also be updated regularly with the new information!

Thank you for visiting my site!